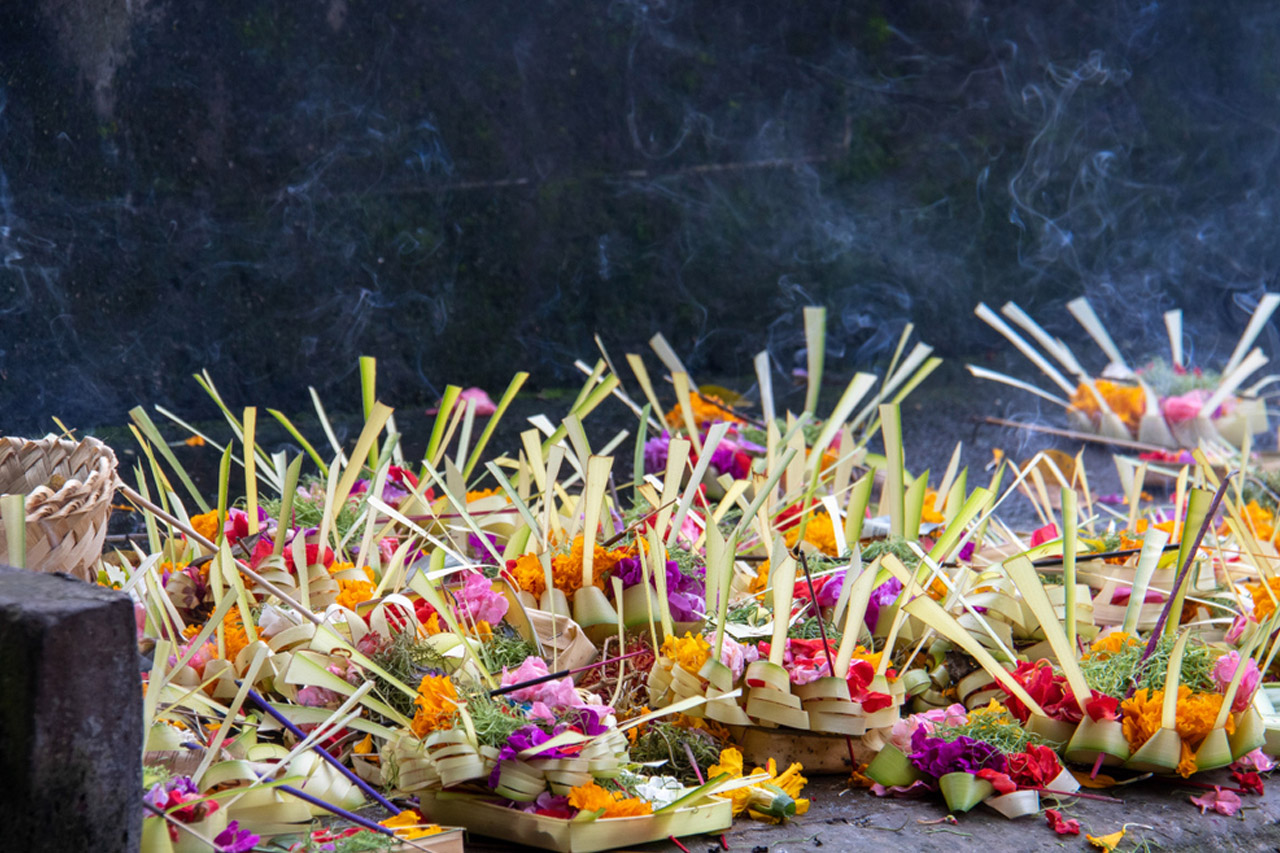 The island of Bali is all about finding balance, harmony and peace and Balinese Hinduism is a great reflection of that. The Balinese tend to pray to the demons and Gods alike in their Hindu Dharma religion, which includes honouring the shadow and light to find balance in life. This play of opposing forces and the acceptance of light and dark, joy and sorrow, benevolence as well as maliciousness is called Rwa Binneda in Balinese culture. Which better way to honor just that than on each full and new moon!

Purnama, or full moon in Bali is a special day for ceremonies and festivities. Hun- dreds of temples all over the island cel- ebrate this special day hosting splendid ceremonies. Balinese believe that Purnama is a propitious day when Gods descend to the earth and give their blessing. On this sacred day, hundreds of ceremonies are held in all corners of the island to satisfy and honor the gods with o erings such as food, fruit and owers. The Balinese them- selves are then blessed by performing various rituals using holy water, incense smoke, petals and rice grains.

The full and new moon days have special importance for the Balinese, as their yearly calendar is based on the moon phases each month. If the moon day additionally falls on an auspicious religious celebration, the ceremonies and rituals get prolonged over several days. The moon for the Balinese has become their timeline and their guide and is even referenced in some of their folklore stories, such as the Kala Rau. The full moon in Bahasa is called Purnama, meaning full moon but also complete, infinite and perfect. It is believed that on this day the moon God Chandra is showering his blessings and magic on the people by offering his light, reminding them of their own light inside.
And as the Universal peace mantra ‘Om Purnamada Purnamidam’ suggests: ‘from the completeness comes the completeness’ as a universal principle. So by making offerings on a full moon day to the full moon, honouring the completeness of the full moon, more of this completeness is invoked in everyones life. This includes good harvest and abundance, so that the Balinese often plant their crops, especially fruit, on a full moon day!
Each full moon is honored by the Balinese people by preparing offerings of fruit, food and flowers, dressing accordingly, visiting the local temple, reciting mantras and holy scriptures, as well as meeting in prayer, ritual and meditation. Purnama Sasih Sadha, as the full moon celebrations are called, usually lasts from morning till midnight. The connection of the Balinese with the spirit world, the Gods, demons and ancestors is very strong so that they create their offerings with the utmost attention to detail and a loving spirit of thankfulness, not only on full moon days, but every day! Wherever you go in Bali, you will see women producing colourful offerings made of palm leaves, flowers, incense and food for their household, their temple and special celebrations with highly symbolic and ritual meaning.
On full moon days Balinese men and women, dressed up in traditional attire of sarong and white shirt for the men and sarong, corset and a white lace jacket for the women with a colorful belt around the waist, take their offerings to the temple, perform sacred rituals including holy water, incense, flowers and prayer and then offer them to the Gods, which are believed to live in stone thrones inside the temple. For each of these celebrations the Gods of the temple are dressed in yellow robes, too. After the offering has been made, the priest gives the respective person blessings and applies purified water and a few Bija, wet rice grains, on their forehead to strengthen their connection with God. The rice grains are a symbol of the seed of life and the syllable Om, the seed sound of the Universe.
Furthermore, full moon rituals include bathing in holy water fragranced with frangipani flowers, such as at the popular Pura Tirta Empul Temple or Tampaksiring, which can become quite crowded on these days! Bathing in the holy waters of the temple is believed to cleanse the aura, wash away all sins and allow the person to remain youthful and attractive.