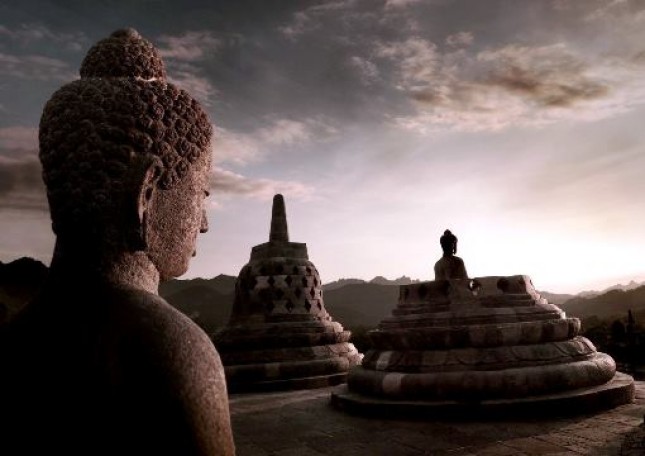 Waisak (also known globally as Vesak Day) is a national holiday observed in both Bali and throughout Indonesia to honour and celebrate Gautama Buddha, the founder of Buddhism. Vesak, the Day of the Full Moon in the month of May, is the holiest day in the Buddhist lunar calendar. In 1999, the UN recognized Vesak Day internationally to acknowledge the contribution that Buddhism, one of the oldest religions in the world, has made for over 2500 years. Buddhism is one of the 6 o cially recognized religions in Indonesia and the second oldest major or world re- ligion in Indonesia after Hinduism. Indian merchants arriving in Bali around 200 BCE likely introduced Buddhism and Hinduism to the island, and Buddhism actually predates Hinduism here. Given this history, do not be surprised to nd that elements of Buddhism and Balinese Hinduism nd themselves “borrowed” by and integrated into each other’s ceremonies and practices.

Temples are adorned with decorations and owers on Waisak. Community groups organize acts of charity, such as releasing caged animals or donating food and gifts to the poor. In addi- tion to paying homage to the Buddha during the celebrations, Balinese devout followers are also expected to bring happiness to the people around them.

Buddhist temples or “Vihara” worth visiting on Waisak include the Vihara Dharmayana in Kuta, which dates as far back as 1876 and was once visited by Tibet’s 14th Dalai Lama. Near Seminyak, the Vihara Buddha Dharma is the easiest to reach and welcom- ing to all. The Vihara Buddha Guna near Nusa Dua is located in a worship complex known as Puja Mandala, dedicated to ve di erent religions, re ecting the essence of religious tolerance in Bali. Visiting these vihara, you may notice that some of them are heavily in uenced by Chinese versions of Buddhism, and some are indeed patronized by members of Indonesia’s Chi- nese community, another example of tolerance and integration.